I was an half hour late leaving the house for a S24O outing, that being a Sub 24 hour Overnighter.  That time deficit had me concerned as my goal was the peak of a local mountain that used to have a fire lookout tower on it, now just a steel scaffold and a block building for some electronics and the associated antennas.

It was the type of experience that I think about a lot, but seldom act on; loading up a bike and heading for the hills just to get away and sleep under the stars, then being back home by breakfast.  I have all the gear for it...soft bikepacking bags, shelters of many colors and shapes, home made stoves, etc.  I love the idea of it; getting out and pedaling all loaded up, knowing that it will be the next morning before you get back home.  It actually strikes me as odd each time I do it.  the problem is I don't do it at all, hardly at all anyway.  It is inconvenient.  It is a bit uncomfortable.  It is more than a bit odd.  I need more of that in my all too convenient, comfy and 'normal' life, methinks.

Back on the bike, and as I pedaled out of town and up and up and up, it occurred to me that I should have caught a ride from the wife and gotten a head start to make up for the lost time.

I am not that smart or at least I AM THAT stubborn, so I pedaled on, watching the clock and the setting sun.  It was going to be close and I had a LOT of climbing before I hit camp.  I also did not estimate how slow I would be on a lightly loaded 29er hardtail as compared to my typical times up this paved canyon road on my road bike.  One hour turned into 1.25 hours and that trend continued.  Each section took just a bit longer than I expected.  I turned off the pavement and onto a forest service road marked with all kinds of dire warnings.  Interesting how public roads can be so private all of a sudden.  With no budget to do any repairs or at least no interest in doing so, we have less campgrounds and open roads and trails in my area So Cal then when I was a kid.  It's a shame, really.

And So Cal has recently seen some semi-apocalyptic weather and some big rainstorms.  Brief but big.  The next few miles of steep dirt climbing, a section of dirt that I recently climbed on my gravel bike, was now nearly not a road at all.  The water deluge had been hard and fast and the sand and rock that came pouring out of the gullies had changed the landscape in a big way.  Lots of walking in sand too deep to ride, at least when going uphill.  Fat Bike country.

SO it was a slow grind to the next sandy pour-out from the hillside above, and a shaky dismount to push over the nasties, then back in the saddle for another 100', rinse repeat.

Tick tock, tick tock.  I hit the saddle that marked half of the dirt climb and time was not on my side.  The next few miles of climbing were better...less washouts, but the water had washed all the topsoil off the road and left miles of hen's egg size rocks and small ruts to negotiate in the fading light.  My legs were fading too and I was sweat soaked, thinking I might stop short of the summit and salvage some light in which to set up camp.

But I really wanted to bag the peak and be there for the night, so I pushed on, hitting the summit in near darkness.  I could not find my Petzl head lamp before I left home, so setting up the bivvy and such with one hand holding a flashlight was less than great.  Down went the groundcloth, then the pad gets inflated, bivy then bag, etc.  About then I noticed the ants.  Lots of them.  Small ones.  Medium ones.  Hmmm.  Shouldn't they be bedding down for the night soon?  Surely so.

A quick search of the surrounding area showed more of the same, so I guess where I was is a good as any.  My bivy sack has a mesh screen head section, so although that was a bit 'enclosed' feeling, it would be bug free.  It occurred to me that I was still in my bike clothes and now as the body heat faded away form the climb, I was getting cold.  Ok...dancing in the dark as I stripped and got into the camping jammies, etc.  The moon rose twice that night.

Dinner was hardly the casual affair I had envisioned, snacking on chicken and biscuits as the sun went down and the stars came out.  Rather it was a ravenous moment of gnawing on a hunk of bird in the dark, famished by the 3 hour climb, and spitting out the gristle parts.  Sigh.

I also could not find the bug repellant before I left so I hoped that I would be far enough away from water to be decently mosquito free.  Almost.  I did have 4G phone reception though, so I texted those that cared and laid back, watching the night sky move in as the quickly fading sunset glow moved out.

Stars.  I had forgotten how many there are.  And shooting stars too.  Nice.  You can't see those from in front of the TV in the house.  The only sounds were from aircraft and crickets.  I zipped in and settled down, all snug in my cap for a quick summer's night.  Then the buzzing began.

I know what mosquitos sound like...high pitched and faint.  This was bigger.  And louder.  And it wanted me very badly.  I never tried to see what it was, but it apparently was partying with the ants that also did not need to sleep.  I would hear it land on the mesh screen but I kept my skin a proboscis length away as I never felt a bite.

I drifted off, warm and reasonably secure in my cocoon.

Morning happened and the sun was creeping up fast, fog laying in the canyons below.  Awesome.  All packed up...trail mix eaten...bike pointed downhill into a long, rough descent to a remote canyon, wet and green even in summer.  Then a 45 minute climb out of the canyon to the last 8 miles, all downhill, of pavement home.


Rolling in home I was tired and a bit dehydrated, but throughly satisfied with myself.  I could have planned better and I think the romance with bivy sacks is about over, but the important thing is I put down the remote, turned off the laptop, and denied the tyranny of the urgent and the comfy.

And I learned that ants don't sleep much.
Posted by grannygear at 7:50 PM 3 comments: 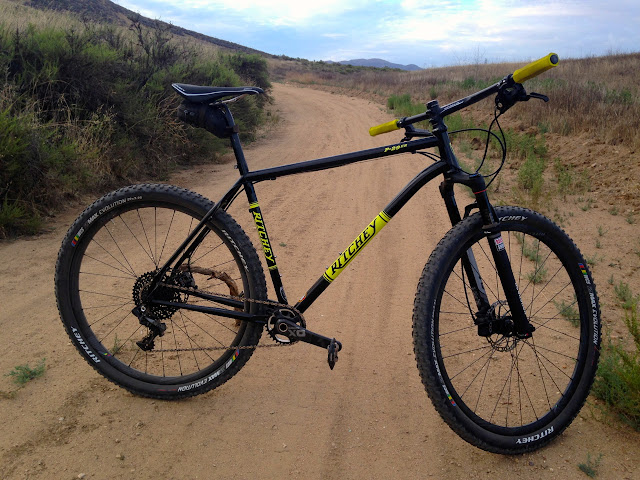 My first 29er was a Karate Monkey, which began geared and then, as I acquired another FS 29, was converted to SS use.  I never really loved that bike.  It felt kind of harsh and skittish in rough sections and weighed a ton.

The next SS was a Vassago Jabberwocky.  Despite flaws of its own, and despite the same piggy weight, I loved that bike.  Just loved it.  I have this distant memory of how it used to feel on the faster crappy trails and fireroads like are so common around So Cal.  I could almost recall the way it moved down the trail in a springy yet solid way but it had been so long and there had been so many other bikes in the mix since then, that I could not remember for certain...like a faint odor that lingers in the air, prodding an even fainter memory.

Each new SS had been lighter and 'faster', first in aluminum, then carbon.  Each one gave me a great ride uphill and was exciting to pedal hard, but something else was happening.  Something was being lost in the trade and it happened so gradually that I did not notice.  Each bike was less and less fun to ride, unless I defined fun as how quickly I went uphill. Strava was pleased.  Myself, less so.

But it is hard to go backwards when that means adding grams to the bike you are riding now, or replacing it with a different bike that will be heavier.  The weight weenie within must have its say in the matter.  So the newest carbon SS 29er, which actually is a very nice riding bike for its ilk, hung on the hook, languishing, and I wondered if things could be different.

But yesterday I unboxed a test bike that I was very curious about, in fact I was darn near excited about it.  But with a recent disappointment with another bike I thought for sure would ring loud and clear and speak to my soul but only murmured, I was thinking I might be delusional about this one too.  I was unwrapping something I had not straddled for years now, and as the bubble wrap and blue painters tape fell away, I saw thin steel tubes coated in black like Johnny Cash on Sunday.

Steel. It looks so odd in a world of hydroformed aluminum and oversized carbon.

So the thing is this...is there really something great about a refined steel frame that seems to transcend other materials in an almost undefinable way?  It sure isn't about having a light bike.  This one was built with very good parts yet weighed what one of my FS alu 29ers (with VERY NICE parts) weighs.

And pedaling out to the trail was just OK.  Nothing magical.  The first steep hill was so so and it sure did not scream KOM like the last carbon wonder bike I rode.  But that carbon winged Pegasus was also nothing I wanted to toss a leg over and trail ride all day either.  Fast?  Oh my yes.  You pedal, it answered. But unless you were hell bent on collecting Strava Bling, then it just was not fun IMO.  And although suffering and speed and performance are all part of the ride experience, let's not kid ourselves.  It needs to be fun.

I hit the top of the climb last night, said hello to 'Da Boyz' that were up there, and dropped in on a quick little ribbon of trail that quickly becomes like a luge run with baby head rocks melting out of the ice.  Within 100', that memory came back like a smack in the face, like that faint odor you could not place just became a warm from the oven chocolate chip cookie melting on your tongue and you said "that's it!"  That supple, lithe, springy goodness of steel doing its thing just rose up and I remembered.

And it was just like that all the way down the trail.  I was boosting off of the bigger rocks and dancing through the ruts with a fine mix of precision and give that was just so fun I was grinning all over.  SO IT'S TRUE!  I was not wrong and I had not imagined it.  And I missed it terribly.

So everything is a give and take.  But I do wonder if, along the path chasing the better and the best and the stiffest and the fastest, that were given so much we did not notice what was taken away?

Posted by grannygear at 2:22 PM No comments: