I was not going to do it, you know.  Too far to drive.  Costs money.  Takes time.  Takes training.  Meh!

But then Navy Mike said he was looking to do something semi-epic this year and did I have any plans?  Not really.  Past the Crusher in the Tushar, I had nothing but a bunch of road centuries and they do not really require training, just lots of riding to be ready for them.  But after a few minutes of texting and emailing, it was settled.  I was going to Idaho.  Again.

My time there was bittersweet in 2013.

I was slower than I wanted to be, but not by much, yet I barely made the cutoff.  Feeling the strain, I flipped early and only rode 72 of the 93 miles for the full course.  So if I was going to go back, I was going to keep my fitness a bit higher and ride it more like a race and less like a tour.  Less pic taking, Posie sniffing, and casual pedaling might get me an hour faster than last year overall.  Maybe.

I also had to decide what bike to ride.  Last year I reserved a Specialized Crux and that was really fun to ride, never having been on a cross bike before.  I had just built up a hard tail 29er for The Crusher race but I did not really like the way that 29er HT worked for me so it caws stripped.  That left me with two choices…reserve a bike again or race whatever I had left that was kinda fast.  The Crux was light and all, but the gearing was higher than I have on my new road bike.  And that 36T/28T low combo was not enough to let me spin up the first long climb out of town.  Being able to spin really helps me stay fresh for the next few hours of riding and so deeper gears would offset the lighter bike IMO.

So I have one other bike that seemed reasonable to ride.  The Specialized Epic is a fast feeling FS 29er and this one has quite a nice build on it…carbon wheels, etc.  Probably 5 pounds heavier than the Crux, it is comfy for all those washboard roads and is a great pedaling bike all around.  Decision made.  Use what you know. 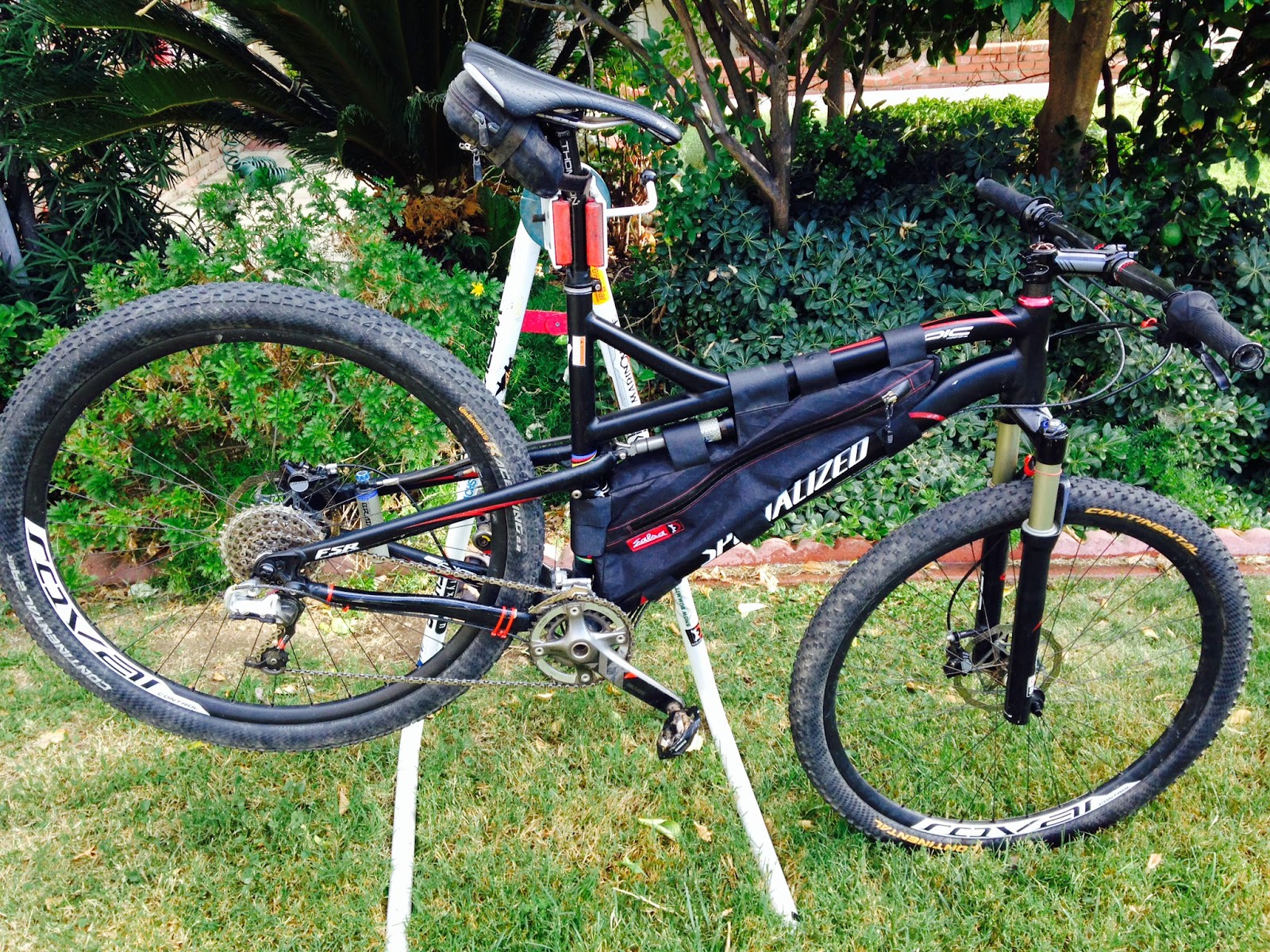 So I set out to work on my fitness by laying out a plan that would see me building all the way till late August.  It was going well and it involved a lot of road riding in the Summer heat.  Then I got sick, some kind of a weird intestinal thing.  That cost me a week.  Then I worked 30 hours of overtime the next week.  Then my house flooded and we had to move out while that was dealt with.  And then I had another bout of illness that took me out for another week.  Although I never stopped riding, it took one month of quality training out of my life.  That sucked.  But it is what it is and at least I am typically fit, but not where I wanted to be.

So I had the bike - The Epic with the XX drivetrain and Carbon Roval wheels shod with fast rolling but plumpish Race King and X King tires.

I had the fitness to survive, I think, but not excel.

I had a plan to tweak a few things too.  First, I knew the route and what to expect.  Barring things like weather and wind, that would allow me to better gauge the effort I could afford to put out.  Of course, the extra 25 miles of the course I never rode is a wild card.  I wanted to get the weight off my back, so no hydration pack.  That meant a frame bag to carry essentials like extra tube, pump, windbreaker, and drink mix packets/supplements.  A bar mounted bag (Revelate Mountain Feedbag) will keep a bottle at hand and I will alternate between Fluid Performance drink mixed up double strong (@200 cals per bottle) and Camelbak fizzy lifting drink tablets.  If the weather is hotter, I will mix in Elete tablytes.

I will treat it more like a very fast ride, maybe even a race.  That goes against my grain as I love a challenge, but the pressure of a race pace does not appeal to me.  But I need to step up and change that a bit.  I made a real error at the Crusher in the Tushar and it was bitter lesson.  If I miss the cut off this time, it will not be due to a tourist mindset.

Ed the Tall is not my travel buddy, but Navy Mike is actually race ready I think and is a very strong rider.  He even has been working with a coach and had a drink mix custom blended just for him.  Sheesh!  I just recently got on Strava and bought a Garmin.  Old mountain bikers never die, they just begrudgingly take on new technology every ten years.  I predict to see Navy Mike at the beginning of the race and at the end and never more than that.  I will be alone again to face my own demons of doubt and suffering but I am used to that.

So off the Idaho I go.  Ready or not.  But don't expect a bunch of pics.  I'm racing this time.
Posted by grannygear at 12:26 PM No comments: